In this section all prices Include:

Delivery can be arranged for a small fee

As with many imports condition and mileage are far more important than age. With Toyota being such a revered brand, many people are choosing these even over the newer and advanced Alphard.

The Toyota Regius offers more room, far more room as the insides can be stripped easily and with the super headroom Mushroom roof, the space in these has to be seen to be appreciated.

Ideal power 2700c engine, which is ideal for singular use or twin fuel LPG system, coupled with the opportunity to have SWIVEL front seats both driver and passenger, makes the Regius a big contender.
JAL announces the Mushroom super headroom roof now being fitted to the Toyota Regius. This now makes the Regius able to compete with the top line Nissan Elgrands at starter entrance budget. 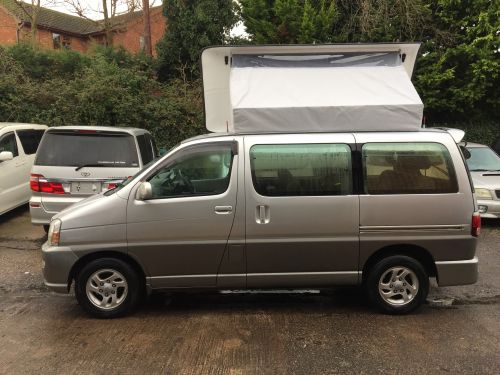 The woods used in your camper conversion are very important and Vohringer is the benchmark of high standards and indeed the industry base mark.

We see many converters start with Vohringer then move to cheaper woods that look the same in an effort to save money.

Vohringer is super light weight and very strong but most of all it has a very strong water resistance, unlike cheaper boards that soak up water.

More importantly Vohringer will stand the test of time and not delaminate quickly like some.

In 2016 we bought back for resale a conversion we completed 10 years ago and the wood was in the same beautiful condition we supplied. Cheaper boards we have seen with our competitors flake in 2-3 years.

We have now expanded the range we do and have included 16 Vohringer colours as well as our enormous choice of floors and upholstery.